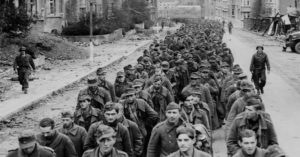 The murder of German priso­ners of war shortly after WWII ended is to be remem­be­red with a new museum at Salina, Utah.

Dee Olsen and his daugh­ter are working to restore a trio of buil­dings remai­ning from the POW camp. Next month the story of the massacre will be told at the museum.

The city was the site of one of the seve­ral camps across the United States where priso­ners were held and while waiting to be sent home later.

Farmers in the area became acquain­ted with some of the priso­ners, as farms could ask that the priso­ners work as free day workers.  Dee Olsen’s family was among them.

The older German priso­ners kept very much to them­selves.  “Their English and my German was about the same, so we were able to talk quite well with the youn­ger men,” Olsen recalls.

Late one night in mid-summer 1945, Army Private First Class Clarence Bertucci was wooing a girl at a local café in the city.

“He told the waitress that some­thing sensa­tio­nal was going to happen that night,” Olsen said, “and then he came up to the camp, got into the tower and shot a large amount of .30-cali­ber machine gun slugs.”

Other soldiers quickly moved to stop the firing but not before the damage was fini­shed.

Nine of the priso­ners died, and many more were woun­ded, Olsen said.

The dead were buried at the mili­tary ceme­tery at Fort Douglas in Utah’s capi­tal. Bertucci was sent to a psychia­tric hospi­tal, and the camp was closed.

Olsen said some of his friends in the commu­nity were not in favor of turning the area into a place of remem­brance.

One friend thought they were out of their minds and that the buil­ding should have been destroyed, he recalls.

The museum grand opening and dedi­ca­tion will also honor a Civi­lian Conser­va­tion Corps camp that was loca­ted at the same site.